The future of slot machines 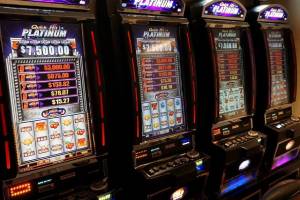 For years, slot machines have been about one thing above all: luck. The player does not need skills. There’s a random number generator that decides whether you win or lose – so easy, so exciting. The online slots industry is constantly developing. Slot machines in particular are attracting more and more gambling fans to online casinos. The topics are becoming more diverse, the features more varied. But that’s not all, because recently there has been talking of another development: skill-based slot machines. So you automatically have the feeling of being more part of the whole and being able to exert influence.

What are the differences between regular and skill-based slots?

Skill-requiring video slots are different from the first classic slots machines. For example, there are bonus rounds that require a high level of skill. The basic game has the same structure for both types of slots. With conventional machines, you have no influence on the outcome of a game. You can only rely on random number generators and hope that you will be lucky. You also need luck with skill-based slot machines, but here and there it depends on your skill.

Whether skill-based slots are actually the future is still being discussed. Basically, the concept sounds like a great idea, but the reality is of course not that simple: You can influence the game, but luck is still involved. One example is the Danger Arena Slot, which comes in first-person shooter guise. Your job is to shoot aliens – the more you catch, the higher the chance of making a decent profit.

Slots that require certain skills and dexterity from the player will certainly become more common in the future. In addition to Danger Arena, Pharao’s Secret Temple is further proof that this type of game is popular: You have to combine different gems while playing. This way you increase the probability of winning.

Skill-based slot machines are certainly not the only direction in which you will orient yourself. We also expect that social gaming will continue to gain in importance. In any case, it is clear that slot machines make up a large part of the portfolio in online casinos. So it is not surprising that the slots are becoming more and more creative and sophisticated.

As far as the skill-based machines are concerned, they still do not differ from conventional slots in terms of the basic game, but the bonus rounds require skill and provide variety. As always, you shouldn’t forget that at the end of the day you will be dealing with a game of chance. Even if you could prove skill, that does not mean that you will even get to the bonus level or that you will always win there. That said, theses types of titles are a great alternative and for sure something we will see more often in the future from the big Slot makers.

Our favorite places to bet

Home » The future of slot machines